You Were There! Comments on Venus Rising at Brixton Fridge

Today I was geekily practising my google advanced search skills* and came across this past discussion on the Gingerbeer website boards from 2007, entitled ‘Blast from the Past’:

Have a read through the four pages of comments for some great lesbian club scene nostalgia which obviously I would have joined in if only it wasn’t from five years back…  Apparently this Gingerbeer thread has been read 4441 times at time of posting, so I’m not the only one out there dreaming of better days/nights.  Some really interesting memories.

Btw I can answer post 55 – the club on the Tottenham one-way system was Beryl’s. Many a New Year was seen in there in the late 80s…Hey Ho Silver Lining! I remember forking out what seemed like a huge admission fee in 1985 (probably a tenner!) justified by the promised buffet which was just crumbs by the time I got there.

What are your memories of women’s clubs/venues? Join in by commenting below!

( All comments are moderated by me before they get published)

In the spirit of further exploration with Google I did the following search where you put in related: followed by a specific web address, in order to find webpages of similar content. See screenshot below: 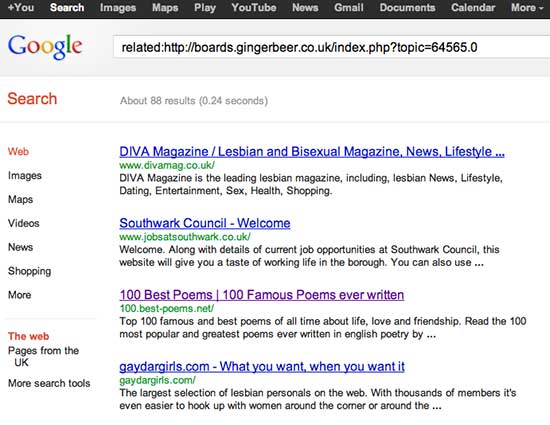 The first and fourth are to be expected, but second and third made me laugh!