Listings from the first ever Diva Magazine 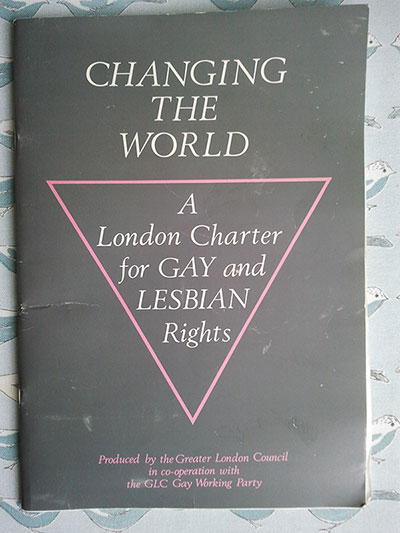 One from the box in my loft. Changing the World – A London Charter for Gay and Lesbian Rights was a thick brochure produced by the Greater London Council in 1985.  It was presumably sent around to schools, councils and other organisations.

See below the letter it came with, from Red Ken himself.  Keep reading for the reason why I’ve included it in my blog about my memories of ‘dancing’ round the women’s venues of the time… 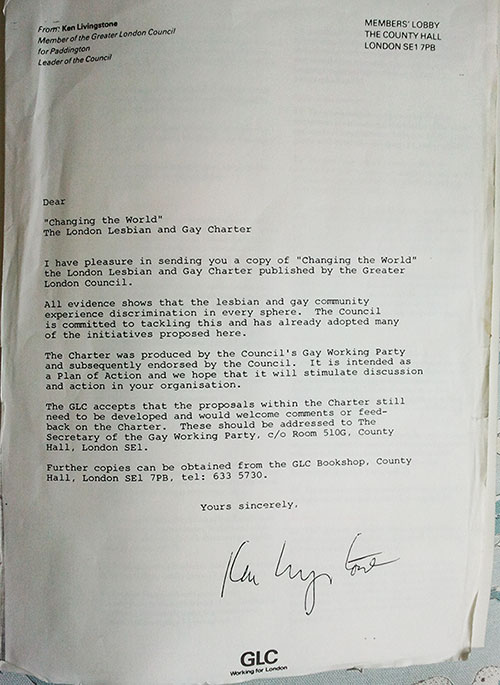 There was something empowering about seeing this confident, unashamed push for equality by the GLC.  It was one of many initiatives of the mid-eighties which, alongside a growing acceptance of gay but mainstream ‘entertainment culture’ (Boy George, Marc Almond, Erasure, Bronski Beat and others), started to really change social attitudes.

A generation of gay and lesbian Londoners owes a debt of gratitude to the GLC and the many voluntary organisations they supported, for making it just about ok enough to be gay.

Not many years later the governmental backlash (Clause 28) came.  But there were by then enough people with pride and energy to be able to stand up and fight.

A copy of this charter reached me when I attended the London Gay Teenage Group (see separate article about the LLGTG) as a fresh-faced 18 year old, fired up by going to London Gay Pride 1985 held on the South Bank.  I remember feeling really young amongst the crowd and seeing very few other teenagers, but I did see the LGTG banner and made a note of the phone number.  The rest is (my) history.

Why feature this in ‘OnlywhenImdancing’?  One night about two years later I was at the London Lesbian and Gay Centre in Cowcross Street, Farringdon.   Every Saturday night they gave over their main basement space to the women’s disco, (possibly to counterbalance the fact that the men had so many other commercial venues available to them).  Men were welcome as guests though, and that night we boogied on down with Ken Livingstone himself, who looked quite at home among the dancing dykes, his moves repeated forever by the wall mirrors.  If he was after street cred, he got it.  Remember, this was way, way, way before Boris thought up his cycling stunts to get down with the people.

A final GLC memory.  The GLC put on a final fling music festival bash on the South Bank just near Waterloo, to say goodbye after they were all shut down – can’t remember what year.  I went along and remember seeing Phranc (jewish lesbian folk singer) live, playing ‘Amazons‘, ‘Lifelover’ and more, and being mightily impressed by her unassuming style and cute flat top haircut.  I even shook her hand afterwards.

Thank you GLC for introducing and encouraging diversity and putting gay rights on the agenda.